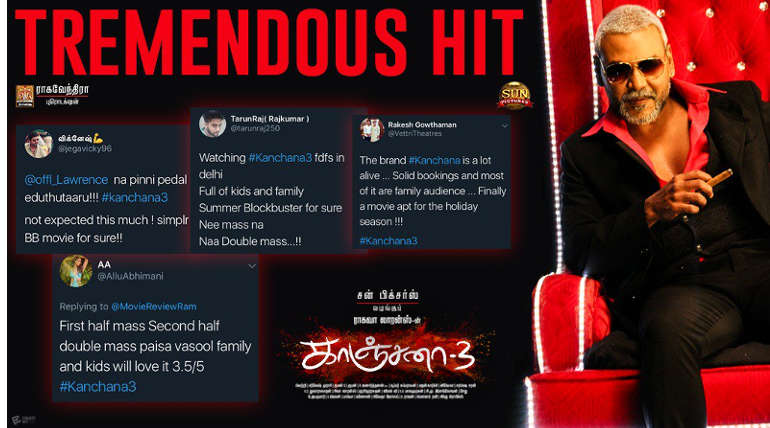 Raghava Lawrence Kancha 3 has received positive reviews from the social medias. The movie is well entertain with comedy, horror, glamour and action. The movie impressed children and family audience. Kanchana 3 or Muni 4 is the next installment of Kanchana/Muni franchise. Vedhika comeback in this movie along with Big boss fame Oviyaa and Nikki Tamboli. Along with them Sathyaraj, Kabir Duhan Singh, Kovai Sarala, Kishore, Manobala, Nedumudi Venu are supporting cast of the film. Kanchana 3 which released bilingual in both Tamil and Telugu on April 19 as summer treat. Sushil Chodhary and Vetri handled the cinmetography and Ruben edited the movie.

Target audience will love it.. ðŸ‘

What do u expect from the franchise is available in plenty..

The predominantly family and kids audience r loving it..

Dir @offl_Lawrence has mastered the pulse of the audience..

#Kanchana3 1st half: @offl_Lawrence loyally sticks to his trademark Hit #Kanchana formula - horror, comedy in the family, glamour, songs.. this loud routine repeats itself. The film starts on a very 'massy' action note.

There shd be a back-story coming in the 2nd half.. Paarpom!

#Kanchana3 @offl_Lawrence has satisfied the audience who loved this franchise with similar story & scenes - Horror, Comedy, Glamour and Songs.

The brand #Kanchana is a lot alive ... Solid bookings and most of it are family audience ... Finally a movie apt for the holiday season !!!#Kanchana3

#Kanchana3 Movie Full family and kids entertainer for this summer . @offl_Lawrence has become a specialist in this genre.
Celebration Summer
Congratulation a Team pic.twitter.com/VVtMiNtGtV