DMK led Opposition parties are forcefully involved in the strike by involving in roadblocks and rail blocks. DMK members have already been involving in protests since April 2 this week. Moreover, many shops were closed on April 5 Bandh citing the Vannigar Sangam support for DMK. Also, trade unions have announced the bus strike supporting the bandh. the normal life of people is affected today.Already, Vanniagar Sangam conducted a bandh on April 3 separately.

Recently, Stalin, Thirunavukkarasar and important opposition leaders were raising slogans against the Centre for not constituting Cauvery Management Board (CMB) and involved in the roadblock with a Black flag in hand in Chennai Anna Salai. They conducted a rally towards Anna Memorial through Marina Beach.

At that time, Policemen stopped their rally and after arguments with police, they tried to move further. Then, the leaders have been arrested. In these circumstances, Udhayanithi Stalin headed the rally ignoring police blocking and sat on roads and raised slogans against the state and Central Government.

Traffic in Anna Salai and Marina Beach road completely blocked because of opposition parties' protests. Also, the busy Chennai roads were deserted due to April 5 Bandh. 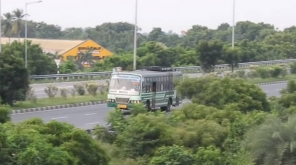