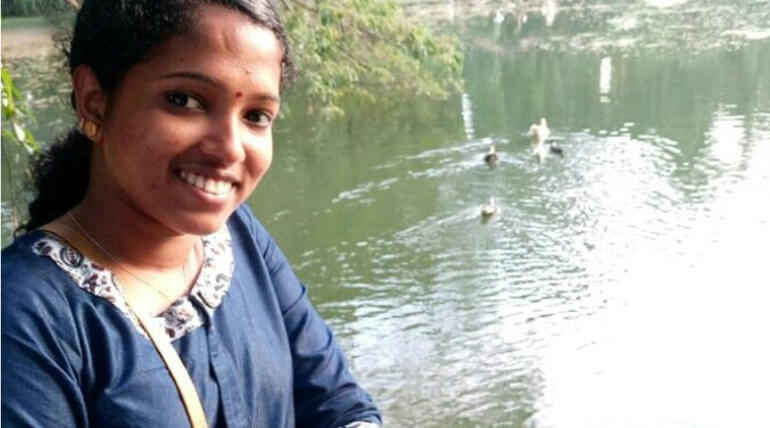 Father stabbed daughter as she loved a Dalit.

A father in Kerala Killed his daughter before she gets married to a Dalit man. Now the family observing homage to the girl on the day of her marriage in which they have planned to do so.

Adhira (22), she is working in the dialysis centre at Manjeri Medical college of Malappuram District in Kerala. Adhira was in love with a soldier for a long time who resided a near far from Adhira's residence. But their relationship seems unacceptable to Adhira's father and her father started looking for an alliance to Adhira.

Following this the pair decided to eloop and get tied a knot without the parents permission. Hence Adhira left her house and get settled with the Army personnel a couple of days back. But as soon as she left her house her father reached her again in the confessed his negative objection to their marriage to Adhira.

Adhira's father asked her to return back to home and also a marriage date has been fixed. Adhira's father and the boy's family gathered up and fixed 23rd March as a wedding ceremony. Both Family has been too busy with the wedding arrangements.

On March 22 Night Adhira's father arrived home in total inebriated manner. Again he started negotiating with Adhira to stop the marriage but soon father-daughter negotiations turned into a serious fight and Adhira's father picked up a Kitchen Knife and pretended to stab her. Adhira fled from her house and get herself hidden in the neighbouring house. But her father tracked her down and cornered in the kitchen of the neighbouring house. Again the fight continued and finally, Adhira has been stabbed by her father right in the chest.

Adhira collapsed down in the same place. Her father fled the place by scaring away the neighbours. Then the neighbours urged Adhira to a nearby hospital but the doctors declared that she had died before reaching the hospital.

Now Malappuram police officials had arrested Adhira's father and kept him locked down.

The much Indians debating in favour of secularism in the country the same much some of this honour killing are staged up every corner of every Indian state.