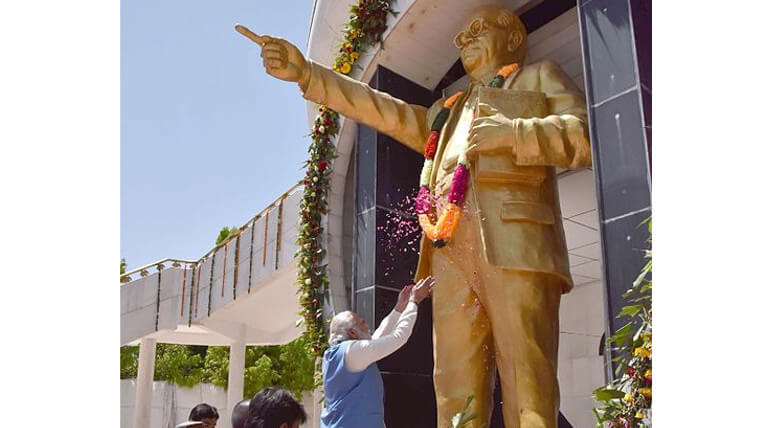 Modi said anyone who born in a poor family could dream and succeed by taking Ambedkar as a role model and also mentioned that one need not be born into a rich family to achieve success. Modi added that he himself had followed Ambedkar's philosophy.

In view of celebrating Ambedkar's birthday on April 14, Modi announced a campaign named “Gram-Swaraj Abhiyan” to be organised from April 14 to May 5, 2018, to conduct programmes for village development and social justice and he called the people of India to participate in the campaign.

Referring to Ambedkar’s dream of industrialised India for development and creation of new jobs, Modi pointed out that the ‘Make in India’ campaign which is advancing well in India following his inspiration. Modi praised Ambedkar for his vision to boost the economy by constructing ports. Also, The government has taken initiatives like Stand Up India and Start-Up India for young entrepreneurs, said in his Mann ki Baat speech.

Ambedkar had laid the foundation for the federal system in the Indian Constitution highlighting the need for combined efforts of Centre and State to develop a country. Following his words, a competitive co-operative federalism prevails in India now, said by Modi.

PM Modi also reminded of Mahatma Gandhi who stated that if man forgets to dig soil he forgets himself thus portraying the importance of agriculture too. Making note of the Central Government's initiatives regarding agriculture, PM Modi ensured that farmers would get a fair price for their agricultural produce this year.

Keeping in view of Easter eve this week, Modi has shared the preachings of Lord Jesus Christ to humans regarding peace and harmony and also conveyed RamNavami greetings to the Hindus.