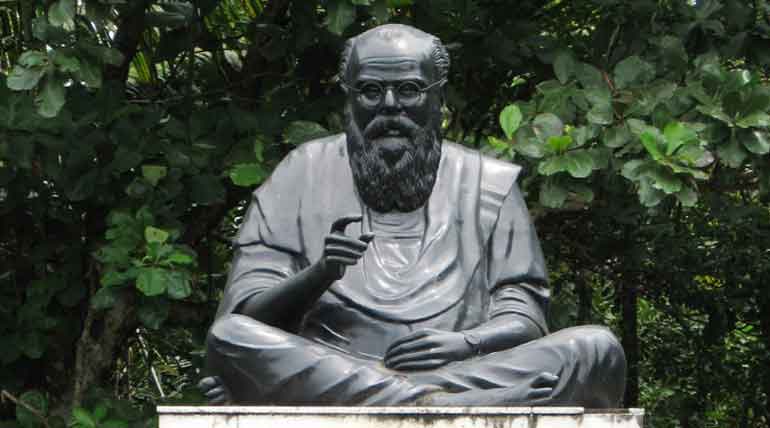 Another Periyar statue had been vandalized by some unidentified person at Alangudi town of Pudhukottai district. Official reports confirmed that the Head of Periyar statue has been completely separated off from the body.

According to the locals of the Alangudi town, the incident would have happened in the late night on Monday or may be in the early hours of Tuesday. The locals have informed the Deputy Commissioner of Alangudi town about the vandalization of statue around 6:30 Am.

After an investigation, the Deputy Commissioner had assured the locals and social activists of the Aalangudi town that the Miscreant will be captured and prosecuted within 24 hours. But the social activists and the locals of that town had warned about lifting a protest if the police failed to catch the culprit as soon as possible.

According to the police officials, they didn't CCTV footages regarding the vandalization of the statue and they were left with complete darkness in the case.

While discussing the issue with a local of that town he said that the vandalisation of the statues of social reformers has been gone fashionable in recent times. The scenarios are started all at once after H.Raja of BJP tweeted about destroying Periyar Statues in Tamil Nadu soon after the vandalization of Lenin statue at Tripura. A Periyar statue has been vandalized at Vellore district with 24 hours after his tweet. Hence H Raja must have to be jailed under the Gondaas act due to his main role play in lightening the moronic things, the local concluded.

The act of destroying statues of social reformers have been started recently after some Hindu organizations deliberately destroyed the statue of Lenin at Tripura after the fall of the left government in the state and a tweet by BJP national secretary H.Raja following the statue demolition on earlier in this month. Following this Tamil Nadu government had imposed serious protection to all Statues across Tamil Nadu. But the protection has not stopped the goons from destroying the statues in the mean of destroying the secularism and peace in the state.

Now again a Periyar statue has been destroyed at Aalangudi town while the Vishva Hindu Parishad backed Rama Rajya Ratha yatra reached the border of Tamil Nadu today at Tirunelveli district on the other hand. following many political leaders and reformists have been arrested by the police department of Tamil Nadu and the district collector of the district has imposed a curfew across the district despite the ongoing SSLC board exams.

Reports claimed that the half level statue of Savitribai Phule has been destroyed by some unidentified goons last night in Telangana state.