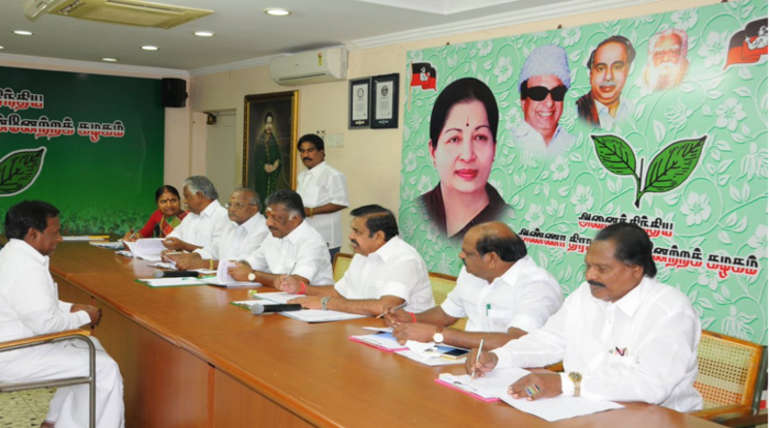 Elections for 38 Lok Sabha and 18 Assembly constituencies in Tamil Nadu were held yesterday. The remaining election will be held on the 19th May for the next Assembly elections. The remaining election has to be held at Sulur, Aravakurichi, Tiruparankundram and Ottapidaram consitituency. The AIADMK office announced that people willing to contest may file a nomination papers.

In this case, the announcement has been issued on behalf of AIADMK. In that announcement, the willingness to compete in the above four constituencies will be distributed at AIADMK head office on April 21. The fee for the application is 25,000 rupees. Those who want to compete in the constituencies have been informed that the petition should be completed on 21st. The first petition can be obtained from 21st April onwards. This can be obtained at the AIADMK head office from 10 am to 5 pm. It should be completed and issue on that day. Earlier DMK 's announcement was announced the by-election candidates.

In case of DMK, for Ottapidaram consitiuency K.N.Nehru, Kannimozhi, Anitha Radhakrishnan, Geetha Jeevan are appointed as incharge. Periyasamy, thangam Thennarasu appointed for Tiruparankundram constituency. For Aravakurichi, former minister Ponmudi and finally for Sulur constituency former minister Velu are appointed as in charge. DMK also ankounced candidates to contest in these four constituency, where the party is currently in charge of the election tasks. The candidates are Pongalur Palanisamy, Senthil Balaji, Saravanan, Shanmugaiya for Sulur, Aravakurichi, Tiruparangundram and Ottapidaram respectively.