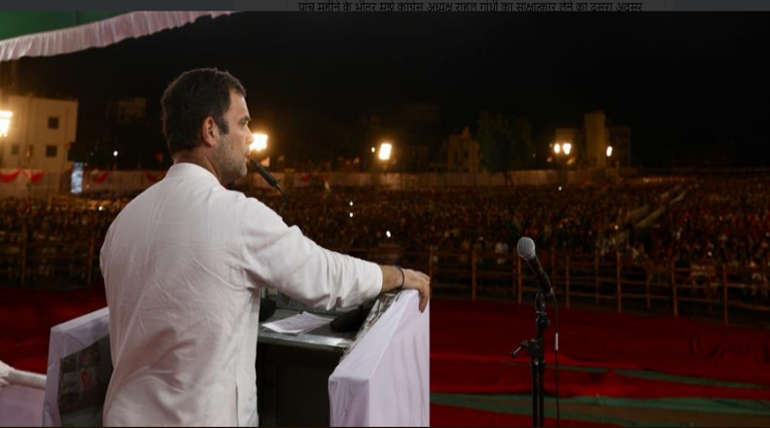 Dholpur: Congress leader Rahul said, "Minimum income guarantee for the poor, the NYAY project, the engine of the Indian economy, is like diesel for running." He said yesterday in an election campaign in Dholpur district of Rajasthan: "I'm not lying here. If we come to power, we will introduce the NYAY plan. It's like the diesel that helps the Indian economy to operate."

Former Union Minister, P. Chidambaram, had consulted with the various economists and created the project. In this scheme, 25 crore people will get 72 thousand rupees annually. For a total of five years, it will be 3.60 lakhs. The money will be deposited in the bank account of five crore women. There is not a single penny. In that account, we will 'deposit' the money.

There are 22 lakh vacancies in government jobs. Modi did not want to fill them. We, in the same year, fill out those workspaces. In the panchayats, we will work for 10 lakh people. Modi has provided millions of rupees for 15 industrialists like Anil Ambani and Mehul Shoghi. But we will help the poor. Government money should be spent on upgrading basic infrastructure facilities. We will build new hospitals, schools, and rocks. We will provide free medicines for the poor, he said. Elections for 11 Lok Sabha constituencies in Rajasthan, including Dholpur, will be held on May 6. 30 seats of the state are voting on this Monday.

Our farmers are our pride & strength. For the past 5 years, Mr Modi & the BJP have treated them as a liability. Indiaâ€™s farmers are now rising up to demand NYAY.

SHARE this powerful short film in support of our farmers. #AbHogaNYAY pic.twitter.com/EfQbyeYcwm