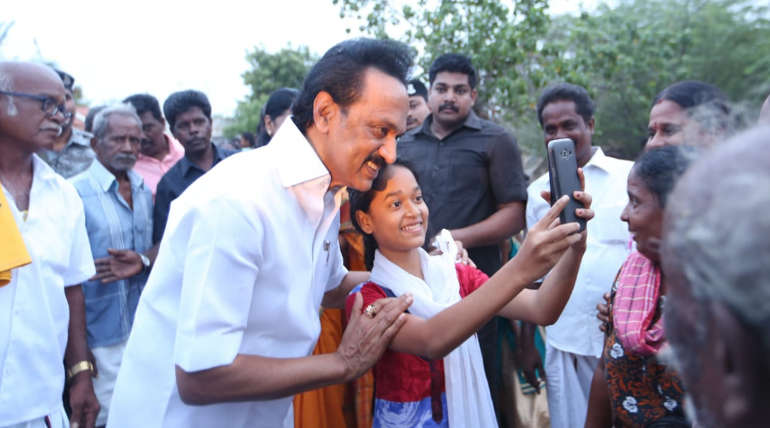 DMK President Stalin Posing in between the Campaign

Tamilnadu politics has always been a gamble of power between the two prominent Dravidian majors, DMK and AIADMK. They have been the unshakable pillars of Tamilnadu politics since the dawn of a political era in our state. They have dominated every other party ever since, both in power and the majority. The response and support they have among the people are huge.

Now, these both parties are deploying their full-on manpower for the four assembly constituencies which is going to be held on 19 of May in our state. The parties and the members are in full swing in canvassing public before the election. DMK has publically proclaimed that they have allocated party members for every 250 voters. They have also allotted campaign managers to update the partyâ€™s president M K Stalin with the reports from the ground level to all the three levels of the campaign.

The partyâ€™s leader has specifically instructed the MLAâ€™s to carry out their duty in full vigour similar to what BJP did in the northern states during the time of the election. They have been told to visit the most common public grounds like tea shops and markets to increase their support. Since the party is in desperate need to win almost all the constituencies in order to secure power, they are in this vigorous duty.

AIDMK, the ruling party has hired some of the private agencies to monitor the polling status and reports are directly sent to the Chief Minister. Apart from partyâ€™s ministers, 15 of the district units are also send to all the four constituencies and they are also said to report to the chief minister. In the present situation, the ruling party already has 114 seats and are in need of only five more whereas DMK along with their alliance need 21 more in addition to their 97 seats which they hold now. The Public has also reported that they could see members of both the parties in every 100-mile radius.