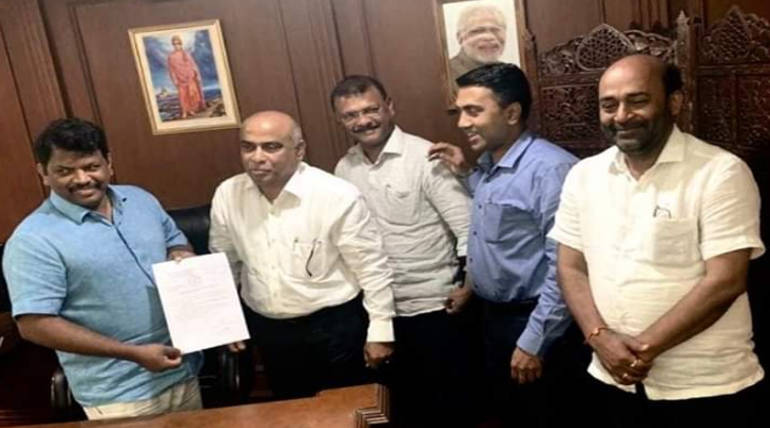 In the Goa state, two of the 3 MLAs from the Maharashtawadi Gomantak Party  (MGP), who had supported the ruling BJP as a sudden political turn around, withdrew from the party and joined midnight in the BJP. The Speaker accepted in midnight that they joined the BJP. An MLA of this party created problem for chief minister's post and got deputy chief minister post. Now that the two MLAs join the BJP, the deputy chief minister Sudhin Dhawilkar is soon to be resign.

The BJP is planning to provide the post to one of the newly joined two MLAs. Thus, the Congress has 14 MLAs in the 36-member House, while the BJP has 12 MLAs and the Congress has 14 MLAs in parallel with the two MLAs. So the Congress can not be ruled by the governor that the party is no longer a single party. One of the MLA Bhavaskar "We joined the BJP at midnight at 1.45 pm from the MGP, but we did not join the BJP and join for the people's will," he said, adding that "my constituency people has asked me to join the BJP." In the state of Goa, the coalition was led by the BJP. The BJP ruled in support of 3 MLAs, the Maharashtawadi Gomantak Party , the Goa forward Party and 3 independents. After the demise of Manohar Parrikar, there was a chaotic environment in state politics because of the rivalry between the coalition parties.

The letter was given while they met Speaker Michael Lobo. Approved by the Speaker, Lobo gave the permission. But the Deputy Chief Minister of Maharashtawadi Gomantak Party, Sudhin Dwivedi did not give a letter of consent to link their party to the BJP. Thus, the BJP has decided to snatch his deputy chief minister.

It is noteworthy that if two-thirds of the party members from one party join another party, it will not join the party's prohibition law and can not take any action in the party office.The Maharashtawadi Gomantak Party  (MGP) has been supporting the BJP's formation in Goa since last year. Congress party spokesperson Sunil Kaavtankar said, "Even if the coalition does not respect the coalition law, even the MGP party that supports them, break the party and drag the MLAs in it and join the party."