Invisible Distance between AIADMK and BJP 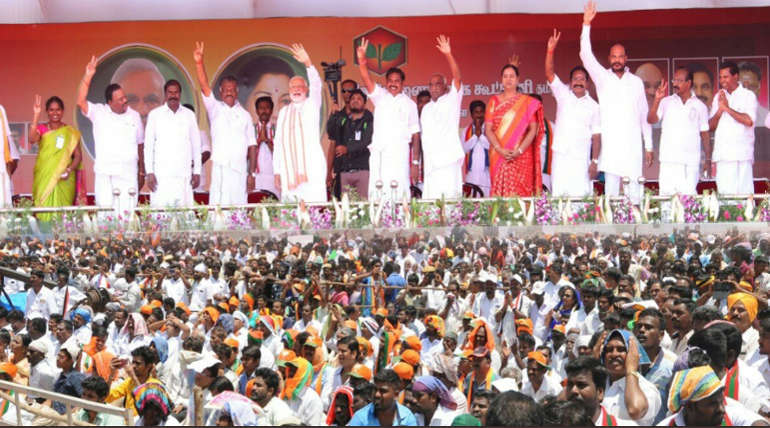 AIADMK and BJP Coalition Party Leaders in a Rally

The ruling party (AIADMK) is in desperate need of winning at least 10 seats in assembly byelection to remain in the safer side by holding their power. To tackle this situation, they came into a conclusion of maintaining some distance from their ally Bharatiya Janata Party to attain victory in 4 assembly constituencies Sulur, Thiruparankundram, Ottapidaram and Aravakurichi respectively. The by-polls are set to commence on 19th May.

AIADMK has a fear of losing the minority votes in the ongoing byelections at four constituencies, where the partyâ€™s vote bank has a majority in western and southern parts of Tamil Nadu. The notable thing is that around 15 per cent from total voters is from the Muslim and Christian Community. The party thinks that it may affect the winning ratio of by-poll constituencies.

Another challenge is that they face this election campaign without their heavyweight J Jayalalithaa, who could tackle the situation of religious and caste discrimination in a deliberate way. This intense move would cost them heavy in the Lok Sabha election 2019 by tilting their success. The higher members of the party feel that there should be a fine line of distance to end this cultural separation and also maintaining a proper relationship, without harming the vote bank of minorities.

To avoid confusion among the supporters of the respective parties, they kept it as bounded one for the smooth relation between the alliance parties. For instance, during the election campaigns, the two big guns Edappadi K Palaniswami and O Panneerselvam gave the election speech and the BJP leaders hasnâ€™t shown much interest by neglecting it.

Meanwhile, the leaders of both parties opposed those facts and claimed that their strong alliance will remain intact forever.

Invisible Distance between AIADMK and BJP