Kanimozhi Alleged BJP has Openly Alliance with the Election Commission 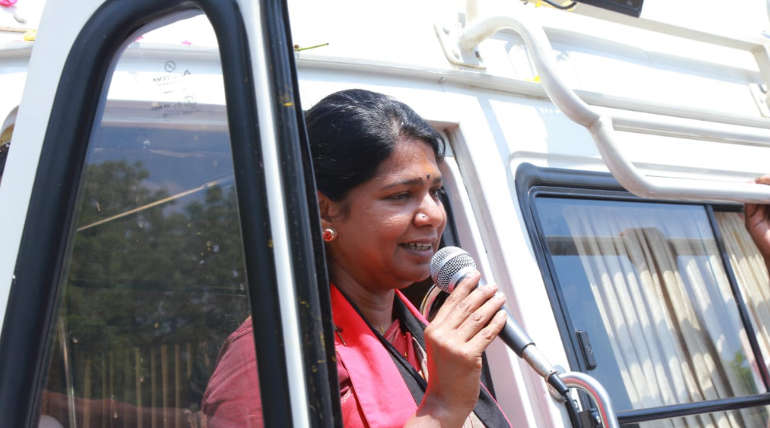 Chennai: Kanimozhi has alleged that the BJP has openly allied itself with the Election Commission. Kanimozhi, a politician from Dravida Munnetra Kazhagam. Currently, Kanimozhi is a member of the Indian Parliament. She is the daughter of Tamil Nadu politician Late M.Karunanidhi. She is having an interest in literary and literary disciplines. DMK MP Kanimozhi spoke to reporters in Chennai Meenambakkam. She said:

DMK does not have to be indirectly coordinating with anyone. Because the DMK coalition is openly known to all people. She said that there is no need to form a coalition with whom they oppose. But the election commission's functions are more visible that the BJP's secretive alliance with the Election Commission. The Election Commission is not the only the government department in the country whereas all other government departments are operating in the country are compelled to  BJP voice.

The DMK leader has taken a no-confidence motion on the Speaker. He does not have the power to make any decision when it comes to a decision without confidence. Previously Thoothukudi BJP candidate, Tamilisai Soundararajan said that there is a DMK alliance with TTV Dinakaran. As Tamil Nadu BJP leader Tamilisai Soundararajan also said that People have no faith in Stalin and DMK. Kanimozhi is not going to win Thoothukudi and DMK will not succeed. Kanimozhi has responded by saying  TTV Dinakaran and DMK have no allied themselves. Kanimozhi is actively involved in the campaign with Stalin, DMK Chairperson.

Kanimozhi Alleged BJP has Openly Alliance with the Election Commission