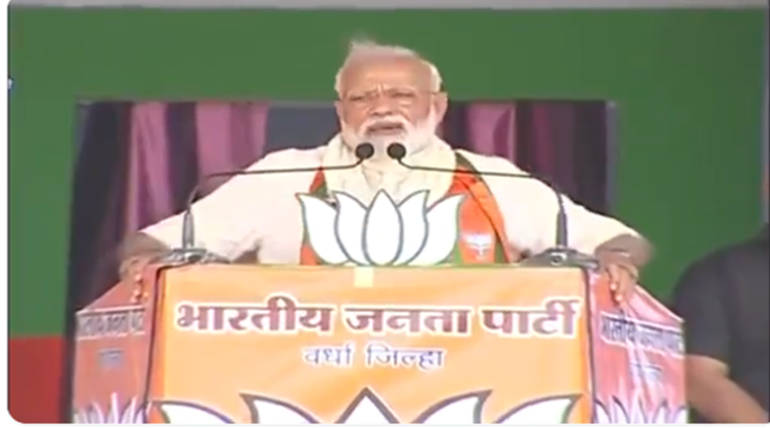 Lok sabha elections 2019: "I am proud to be the guardian (chowkidar ) of the toilets", Prime Minister Modi proudly said that he is protecting the dignity of millions of women. Modi has responded to the Congress party claiming that the BJP, including Prime Minister Narendra Modi, is using the word "Chowkidar" for pride. The BJP compete with the Shiv Sena alliance in Maharashtra. Prime Minister Modi today launched the Lok Sabha election campaign in Varda city. The meeting was attended by Chief Minister Devendra Bhadnavas, Union Ministers Nitin Gadkari and Shiv Sena Party leaders.

Prime Minister Modi spoke at the meeting: "I am proud to be the guardian(chowkidar) of the honor of women in this nation. Without proper bathing in the house, women are in great humiliation. Women waited to spend their debts in the early hours of the sun and before sunset in the evening. But we have saved their self-esteem by tying women to their homes. I have saved their dignity.

But I'm serious about that. Sharad Pawar is the most experienced leader. Whatever he is talking or doing, he is well-predictable. He recently announced that he will not contest the election. He announced this as the prime ministerial candidate at the time of the announcement of the election war before he declines from the field, knowing that the present situation is not favorable.

The family politics flows into the Nationalist Congress Party. Sarath Pawar stops family members to tighten the party. Sarat Pawar looted funds for funding, construction projects and infrastructure projects for irrigation projects during his tenure as minister. Now you feel sorry for those scandals. The BJP has completed its duties of 99 dams that have been halted since coming to power. In Maharashtra, we completed 36 mini dams. In response to the Pulwama attack, our Air Force destroyed the militant camps in Pakistan's Balakot. More than 300 militants were killed. But all this is suspected by the opposition. And they are asking for proof. I am asking. Do you have heroes in India or are you friends who are friendly to neighboring countries?"