Lok Sabha Elections 2019: Leaders Jibe Amongst Each Other More to Addressing People 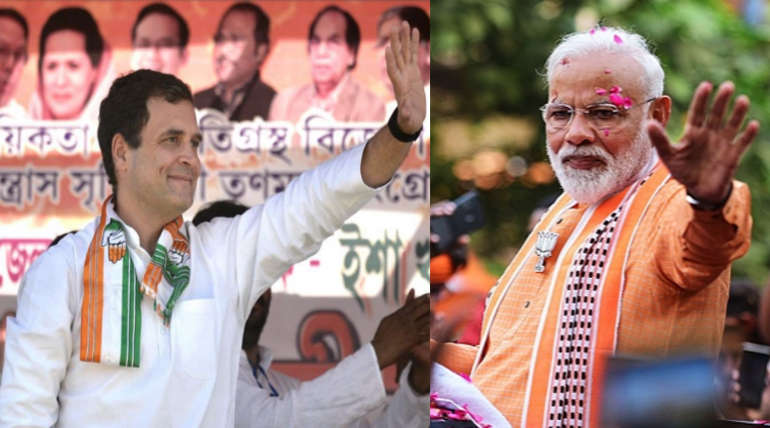 Leaders Jibe Amongst Each Other More to Addressing People

Congress president Rahul Gandhi and Prime Minister Narendra Modi prove equally competent in jibing at each other. There were altogether 20 complaints filed by the Congress party towards Narendra Modi for infringing the model code of conduct. By the same token, BJP complained about NDA and the most highlighted complaints are â€œchowkidar chor haiâ€ towards Rafale deal and â€œtribals can be shot atâ€. Also, Gujarat court has summoned Rahul Gandhi today in a criminal defamation suit for spelling â€œWhy all criminals have Modi as a surname?â€ He has taken the names of Narendra Modi, Lalit Modi and diamontaire Nirav Modi. The complaint has been made by the MLA of BJP Purnesh Modi (incidentally Modi surname again). Also, Rahul Gandhi exasperatedly snorted that chowkidar Narendra Modi queued up in Anil Ambaniâ€™s and Nirav Modiâ€™s house.

During the campaign in Amethi,  Priyanka Gandhi was shocked to see profanity popped up, where a bunch of children recited anti-Modi and congress-friendly slogans. Again it is not advisable to let it go as a senior political leader but she reacted promptly that â€œthis is not a nice one and be a good childâ€.  It is applaudable. Congress complained about Narendra Modiâ€™s hate speech and armed forces use for political campaign. Also, the inactiveness from ECI tacitly endorsed the favouritism. Congress leader Navjot Singh Sidhu today lashed out at BJP saying that chowkidar chor hai. The repercussions are expected to be huge as this statement has already taken a toll with the Congress President Rahul Gandhi and apology statements are whirl winding.

The election commission has started giving clean chit for Modi one by one for his remarks. â€œNuclear weapons are not meant for Diwaliâ€ and â€œminority is majorityâ€ comments do not violate the model code of conduct stated Election commission. Everyone is dubious on what for the campaign is conducted? To compete with policies for the welfare of the public or complain between each other as the political arena is duopoly with no options in hand for the public. This can be answered only by the public.

Lok Sabha Elections 2019: Leaders Jibe Amongst Each Other More to Addressing People