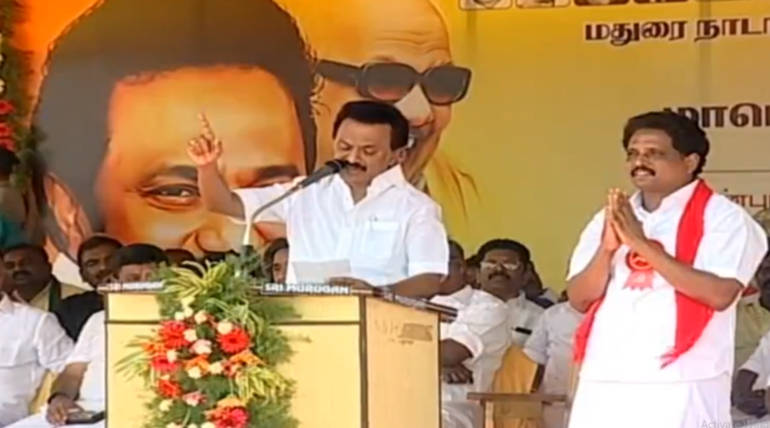 DMK leader MK Stalin participated in a public rally at Vandiyur in Madurai and met Communist Party of India canditate Venkatesan said: India is going back 45 years. India has not progressed by the Modi government. It has been lowered. The Modi government's achievement has only increased unemployment. I did not say this. In a study report, 6.1% unemployment in India has so far been reported.

This is because the candidate contesting in the parliamentary election in the constituency Venkatesan is the main reason for this. Tamil writers should go to parliament. The fame of Tamils should rise. He is a man who can save the Madurai. He's not just going to Parliament for us alone. You are also proud for him.

Even recently, Prime Minister Modi went to set up a hospital in Madurai. The ceremony is just a festive ceremony. Is it necessary to lay the foundation? Do not allocate money for it? Will the hospital come automatically? As has already been announced, Madurai does not belong to Uttar Pradesh?

He announced 100 smart cities would be created in India. But now there is not one in Tamil Nadu. If it comes to power, I will do it, but I do not do it. In the M Karunanidhi regime, the farmers had to discourage credit, free electricity and mini buses. Today, Edappadi rules like the ghost reigns.  Modi government think about Tamil Nadu only during election time. what is the use? What Maduraians doing? Think about it.