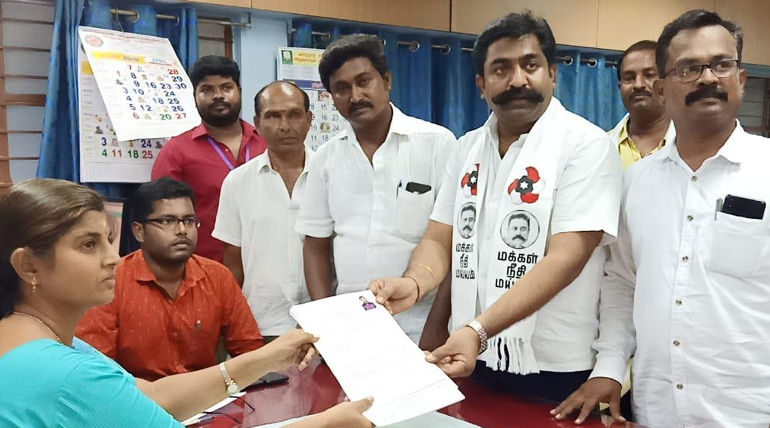 Makkal Needhi Maiamâ€™s candidate for Aravakuruchi hails from Karur and at 41 years of age has a Diploma in Mechanical Engineering. He is the managing director of two schools and a college. He is also the Vice-governor of the Rotary District with nine revenue districts under its control. In addition to these, he also acts as a financial consultant for many financial firms.

His manifesto says that he is an avid supporter of education as being the pillar in developing the rural peopleâ€™s lives and living standards and to be one with the people in order to understand their needs clearly. He also likes to travel with the party leader Dr Kamal Haasan to better communicate the partyâ€™s and his own agenda that is to enable a more people-centric government. He is not just all talk and no work as his credentials authenticate his claims.

The reason for Aravakuruchi by polls is the disqualification of the win of Mr V. Senthil Balaji. The disqualification was done by the assembly speaker Mr P. Dhanapal citing the anti-defection law of 1985 which prevents a candidate from jumping to other parties after winning the election. Mr V. Senthil Balaji jumped from ADMK to DMK in December 2018 after the intraparty conflicts in ADMK in 2017. He is poised to win this by poll too but his recent activities donâ€™t help his side as he just received an anticipatory bail on a case of him trespassing the office of returning office in Karur.