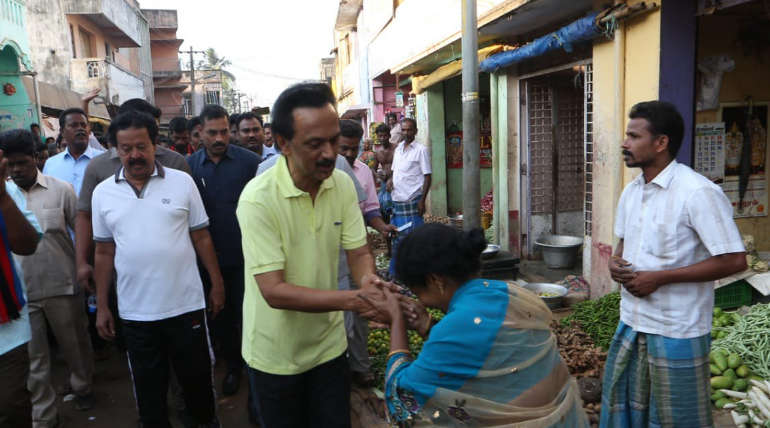 Thoothukudi: The by-election on May 19th comes to the assembly constituencies of Ottapidaram, Tiruparankundram, Sulur and Aravakurichi. The last nomination papers filed on the last 22nd day (29th) were completed at 3 pm. AIADMK to contest Ottapidaram seat Candidate Mohan, DMK Candidate Shanmugaiya, AMMK Candidate of the constituency is Sundarraj, Makkal Neethi Maiam Gandhi, including Naam Thamilzhar candidate Akalya and Independent candidate of the total nomination of 37 nominees.

Their party and coalition party executives are taking part in the campaign for candidates contesting on behalf of major parties. DMK Leader MK Stalin begins election campaign in Ottapiram constituency tomorrow 1st May. He supports his party candidate Shanmughaya and runs in the open van throughout the block and visits the people directly and tomorrow and day after tomorrow that is for 2 days. For this purpose, MK Stalin is travelling from Chennai to Tuticorin today. At the airport, Thoothukudi North District DMK Secretary Geetha Jeevan MLA, Southern District Secretary Anita Radhakrishnan MLA are there to welcome him. He then stayed in a private hotel in Thoothukudi and advises party executives for election.

On the occasion of May Day, Tuticorin will be held tomorrow (1 am) The rally was started on 5th street from Thoothukudi to VVT signal. The signal arrives at the platform set up near the Chidambaram Nagar bus stand.  In this rally M K Stalin and DMK  number of executives and volunteers attend. MK Stalin speaks at a meeting that will take place later.

Later he starts his election campaign at Ottapidaram constituency tomorrow evening. He goes to the open van and meets the people and collects the vote. MK Stalin will start a campaign at Thoothukudi Union Housing Board Welfare Association meeting at 5 pm and Mappilaiyoorani in the evening at 6 pm, at 7 pm in Tharuvaikulam, at 7.30 am at Puthiyamputhur and 8 o'clock in Ottapidaram town.

The next day (2 pm), MK Stalin will be present at 8.30 am at the Spic Nagar Residents Welfare meet. At 5 pm, at Korampallam, Pudukottai, Kottampuli, Thangamalapuram, Katalankulam, and at 7.30 pm at Thanendal village.DMK stands for 2 days of MK Stalin's campaign in Ottapidaram constituency. So the Administrators and volunteers are enthusiastic. The election campaign has begun to circulate in Ottapidaram constituency due to the presence of various party leaders following MK Stalin.