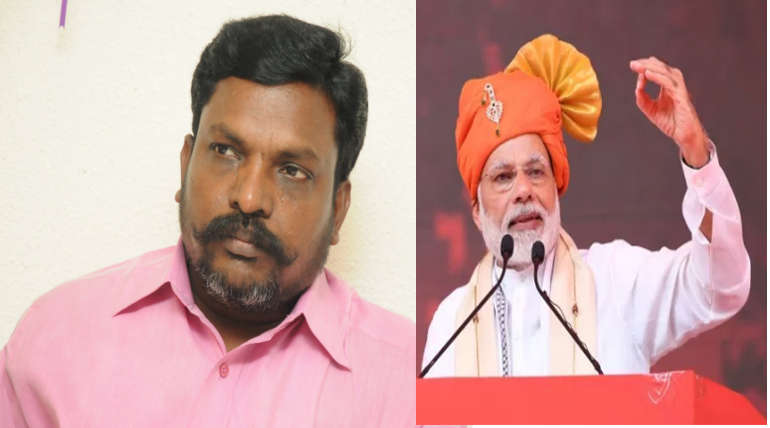 Chennai: Viduthalai Chiruthaigal Katchi (VCK) Leader Thol Thirumavalavan said Prime minister Narendra Modi, who is unable to ask the vote for his achievement record, asking vote by mentioning the caste. The protest was held on the behalf of Tamilnadu untouchability in Chennai Valluvar kottam to arrest the detainees who blocked the voting of Dalit people in Ponparappi Villages in Sendurai, Ariyalur, Tamil Nadu.

The participation of Viduthalai Chiruthaigal Katchi (VCK) president Thol Thirumavalavan in Valluvar Kottam said Ponparappi is not against the Dalit people; It is a challenge to democracy. He said Paatali Makkal Katchi try to force the Tamil Nadu into violence in the name of the caste, Thirumavalavan said that the party would be defeated in all the competitions and will fail in all the consistencies in which Pattali Makkal Katchi stood. He said that Ramadoss recent statement reveals that he is preparing to carry out the greatest violence after the vote count and strongly condemns such demagogic tendencies.

Furthermore, he condemned the riot happened in Ponparappi. He concluded by requesting the Tamil Nadu Government to provide protection for both Archbishop Ezra Sarkunam and Mutharasan. In this case, Archbishop Ezra Sarkunam of the Evangelical Church of India, who participated in meeting in Madras, has criticized the Vanniyar community for its abominable words. Ramadoss, in turn, condemned that Ezra's sorcery should apologize to the people for discrediting the Vanniyar. Otherwise, the biggest struggle will be conducted against the Ezra Committee. The society will see the rise as a political gain in the drain of anti-Vanniarism, if they are spreading only on behalf of the Vanniyar people.