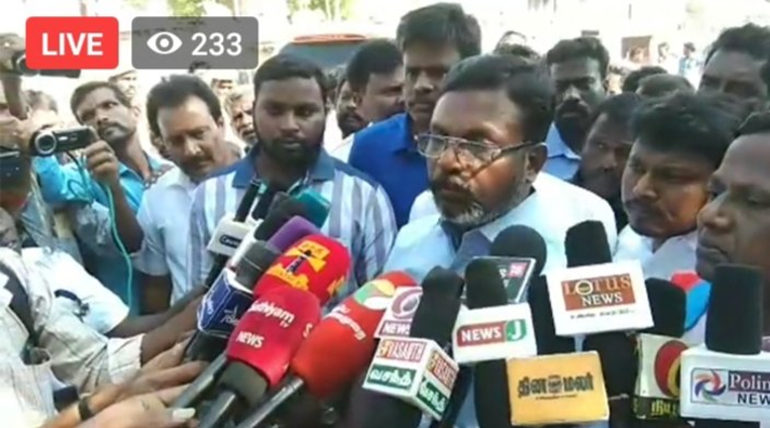 In the village of Ponparappi in Ariyalur district, the polling took place on the 18th of April. At the polling station, the leader of the VCK Party, Thirumavalavan's iconic symbol pots were put on the road by some of the Vanniyar community people and supporters of the leader of the party. There arose a bitter conflict between the PMK and the VCK. In the dispute, more than 20 houses were damaged by the PMK supporters and more than 10 injured in the attack and have been admitted to the Jayankondam Government Hospital. VCK volunteers are engaged in a series of protests in Ariyalur district. At this stage, the party leader Thirumavalavan met with journalists condemning this incident.

"The vast majority of people have voted in favor of the DMK coalition. DMK Alliance will win a huge victory. DMK is also committed to winning the 18 assembly elections. People have openly expressed their dissatisfaction against the AIADMK - BJP coalition. In many places, AIADMK allies are engaged in violent activities because of the fear of failure in the election".

PMK Party organizers are speaking in campaigns to take control over the polling stations even before the elections. Caste and religion are trying to trigger emotions and seek political gain during this time. At the mid of these events, PMK  had an attempt to capture polling booths at different places of assembly in Jayankondam and Ariyalur. As a result, violence has occurred in some places and the police along with district administration are not taking any action against those involved."

"On 24th of April, a protest will be held on behalf of the Viduthalai Siruthaigal Party along with coordinating parties from all districts condemning Tamil Nadu Govt and police. The police and district administration should take appropriate action not to incur caste politics."