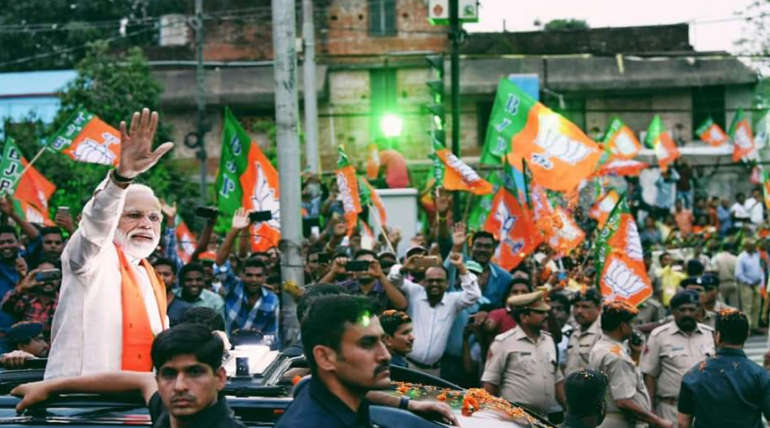 Pratapgarh: On the last day of the campaign for the fifth phase of Lok Sabha election 2019, Prime Minister Narendra Modi has moved towards Pratapgarh. From Pratapgarh, he will also visit Sultanpur and Amethi Lok Sabha constituencies which are adjacent to Pratapgarh.

In GIC Ground of Pratapgarh, Prime Minister Narendra Modi greeted all the candidates of Uttar Pradesh. He thanked the voters of Uttar Pradesh for voting on four phases of the election that the results are going to come. Chief Minister Yogi Adityanath tool control of the entire campaign even before the arrival of PM Modi in GIC Ground of Pratapgarh. Lok Sabha candidates from Philibhit, Sultanpur and Union Minister Maneka Gandhi along with Pratapgarh candidate Sangamlal Gupta attend the campaign.

CM Yogi Adityanath said that PM Modi work is not only appreciated by neighbouring country but also most of the leader of the world. At the same time, the poor and oppressed of the country also got justice at every level. The development works done in the country in the last five years are unprecedented. We should choose Modi Government, to establish India again as the world superpower.

Prime Minister Narendra Modi arrived in Prayagraj from the aircraft from Delhi today. After landing in the Pratapgarh police line from the helicopter, he reached the State Inter-College Ground which is covered by police line in a tremendous security circle. The security arrangements for PM Modi public meeting are being strengthened. CCTV will be on entire GIC grounds.

Every person who comes to the public place will go through the metal detector. For this public meeting, seven police superintendents, 20 COs, 200 security men, seven hundred soldiers, paramilitary force have been set up. SP security Balendu Bhushan Singh has been made in-charge of Prime Minister Modi's Fleet. They will remain in CO bandage. The distance of the public meeting from the police line is about 200 meters.

Assistant Superintendent of Police Fatehpur Pooja Yadav has been made in-charge of this route. SP IOW Varanasi Satyendra Kumar Singh in charge of this public place. ASP Traffic Prayagraj Kuldeep and ASP High Court Prayagraj Girijesh Kumar will be accompanying them. Next to the right and left the side of the platform there one VIP gallery and seven other galleries have been created after the VIP gallery. In charge of a CO, four galleries have been made. With each CO, two guards, eight soldiers, one Platoon PAC will remain in the grounds.