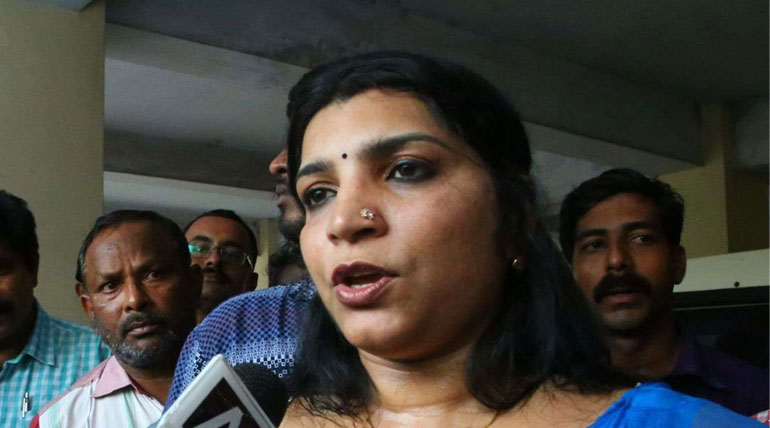 Saritha Nair Who Contest Against Rahul in Amethi

LUCKNOW: The Election Commission has set aside the Chilli symbol for Saritha Nair contesting against Rahul Gandhi in Uttar Pradesh Amethi constituency. Sarita Nair, an actress from Kerala, went to jail for Solar Panel fraud case. She filed a nomination picket against Rahul Gandhi in Wayanad constituency in Kerala. Similarly, she filed a nomination in Ernakulam constituency. But her candidacy was rejected because she had criminal cases.

As she contesting against Rahul Gandhi is a big shock for the Congress party. The Solar Panel fraud was the fraudulent allegation of a huge stir in Kerala. In buying and selling solar panels huge money transactions went on. Many people have cheated by this allegation. An allegation was made in 2013 that the Congress government has collapsed several crores. The main accused were Sarita Nair and her boyfriend Biju Radhakrishnan.

Former Kerala Congress Chief Minister Oommen Chandy was also named in that scam. In this case, Sarita Nair said that some of the members of Congress have used me sexually. She complained of sexual harassment caused a big stir. She told that Rahul Gandhi did not listen to her complaints as she wrote many complaint letters to him. So she said she is going to contest against him.

In an interview, she said, "I have written several letters to Rahul Gandhi about the hardships I have suffered. But he did not answer. That is why I am now in the election to teach Congress party lessons. If I get justice, I have no desire to win the election."

Congress leader Rahul Gandhi is contesting in Amethi in Uttar Pradesh. Actress Sarita Nair again filed nomination papers against Rahul Gandhi. But her nomination in Kerala was rejected but accepted in Uttar Pradesh. In the constituencies including Ameti, the symbols have been assigned to the selected candidates. Then the green chilli symbol was assigned to Sarita Nair.