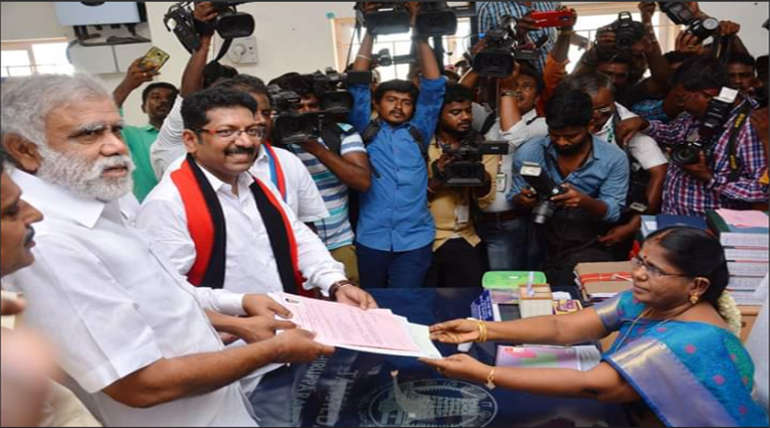 Thiruparankundram by-poll received 63 nominations from different candidates, including major political parties out of which 44 were accepted amidst some of the counter charges by the candidates in taluk office.  The final voter's list for this assembly constituency contains 3,04,478 voters, which includes 1,50,533 male and 1,53,918 female voters, along with 27 other voters. The by-election for Thiruparankundram was recently announced by Election Commission which ended in a legal conflict. The nomination for the by-poll started from 22nd April and went till 29th April, where 63 candidates filed their papers.

On the day of scrutiny (April 30), the chaos began at taluk office where some of the independent candidates claimed that P Saravanan (candidate of DMK) has done an incomplete nomination and demanded that it should be rejected. Meanwhile the returning officer Panchavarnam declared the Saravananâ€™s nomination has been accepted. When S Muniyandi the AIADMK candidate turned for scrutiny, other candidates including Saravanan questioned the officers by submitting the copies of the electoral roll, where the Muniyandiâ€™s name is visible in the voter's list of both places Perungudi and Avaniyapuram respectively. They raised voices to reject the nomination of AIADMK candidate for producing duplicate details, but it was accepted.

The nominations came under scrutiny on April 30 at 11 am in the presence of various political parties including their candidates and representatives. The rejected nominations include producing incorrect credentials, duplicate representation of political parties and fake candidates. As per the norms of EC, the withdrawal of nominations can be done till 3 pm on 2nd May 2019. Later in the evening, the finalized list of candidates along with their symbols will be published.