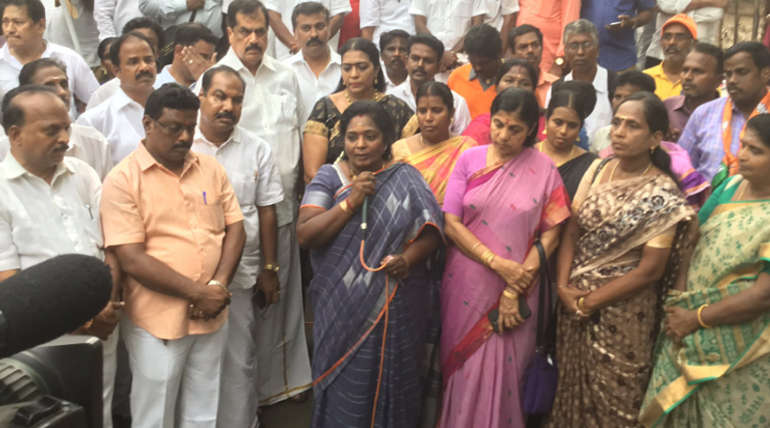 Chennai:  Tamil Nadu BJP leader Tamilisai Soundarajan has commented on DMK leader M.K.Stalin on her tweet that  "TamilNadu people have no faith on Stalin. Stalin had done shirt torn, competition Legislative Assembly, but none of them works out. Now he plans for a non-confidence vote, that too will not work out and no way beneficial".

Yesterday, the Speaker sent a notice to the 3 MLAs. On behalf of the DMK, the Speaker has been given a non-confidence vote.  Previously in 2017, February Stalin was thrown out of his shirt when he was thrown out of the assembly. After being interviewed at the assembly premises, he later departed to the governor's house by car. When he saw the crowd gathered, he left the car. Then he opened the torn shirt and explained to the people silently. This created a stir in the political situation at that time.

BJP Tamilnadu leader and Thootukudi constituency BJP candidate Tamilisai Soundarajan recalled this incident by mentioning no way beneficial. She has been active in the BJP for 15 years and has served as District Secretary, State Medical Officer, National Coordinator of the Medical Team, State General Secretary, State Vice President and National Secretary. But in the social network, netizen trolled her by asking the questions, "If you do not believe, how can you sit on the opposition?"