Thirumavalavan denouncing the Attack on Dalits and Demonstration Announcement 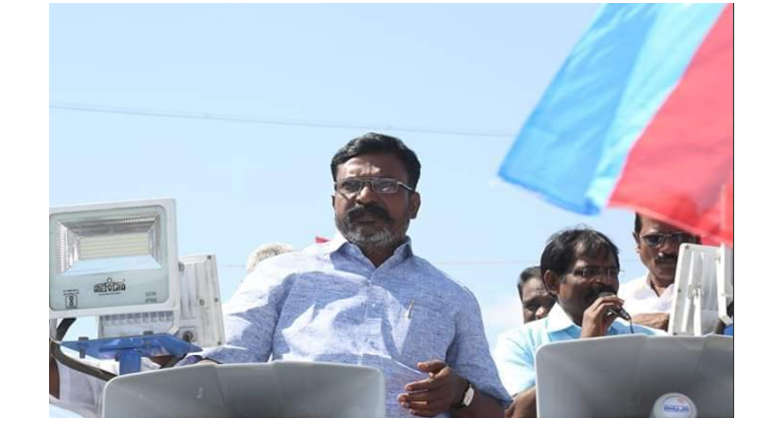 Thirumavalavan denouncing the Attack on Dalits

Viduthalai Chiruthaigal Katchi leader Thol.Thirumavallavan said that protestwill be held on 24th and 25th of April, denouncing the attack on Dalits in Ponnuparappu. On Thursday, April 18, 2019, the Chidambaram District, Lok Sabha constituency, Kunnam constituency in Ponparappi , a riot was held on April 18, 2019 by the casteist and communal forces against the dalit community. What is the crime committed by the Dalit people in the attack? Except they are Dalits; And what else did they do, except that they had voted for their favorite pot symbol?

What happened on the day at Ponparappi ? In the morning, a large number of Dalits have recorded their votes with great passion. Dalit youth acted very hard and brought older people to vote.Unsuccessful caste, religious fanatics made the Dalit people who came to the polls, particularly women, were very insulted and threatened in the presence of police. In addition, the hoax on the pot symbolized broke pots in the front of the polling station and created tension. In spite of this, the Dalits continued to vote.

This led to the caste-communal violence and mobilization of people from neighboring towns, with more than 200 people scrambling with guns and rolling weapons into the dalit people's homes. Women, elderly, and children have blindly attacked everyone. The tiles, the furniture and the bicycle carcasses have been brutally beaten and destroyed. Two bicycles have been burned by fire.

Asked, "Do you vote to the pot?" and made a dalit's finger bone broken and tearing out the flesh. About 50 people were injured in the attack. The injured have been admitted to Thanjavur General Hospital and others in Jayankondam Public Hospital. Hundreds of Dalits can not vote because of this violence. It was also reported that the Dalit-based villages of the surrounding villages were scared of the encounters at Ponparappi and avoided voting for more than 3 o'clock in the afternoon.

It is not the usual election violence between the parties. Fascist repression planned against the Dalit people in the name of the caste. The repression of the Dalits is a repressive tendency that threatens all sections of the poor, engaging in illegal and anti-social activities such as violent rampage, seizing polls, fraudulent votes.

As usual, the report has been published in the mouth of the mouthpiece to disturb the problem of spreading the slander against the Dalits. It is a false statement that dalit youth have been humiliated by other non-Dalit women who came to the polls and violently attacked the Vanniyar community. In the village, the Vanniyar is a minority of about three thousand voters and the Dalits are the minority with only about 650 voters. And there are four polling stations in the campus for the Vanniyar and other Dalit community.

Around a kilometer, dalits should walk and come to the polls.

In such a situation, the question of Dalit youth attacked other communities and that women were so disgusted that they are easily acceptable. This can only be felt by honest people. It is their long-standing routine that all the violence against the Dalits and the women's problem is not in the wrong and the spread of the evil. It is the usual practice of the pampered to always wear women as a dice on the basis that it is easy to understand what everyone says.

If it casts a caste fire, it will spread throughout the country in the long run; That fire may be cold; In the expectation of political gain, this is their job to blame the victims for such dalits. The same technique is now handled in the golden age. A few days back, a last DMK organiser cleaned pot symbol advertisement near his home. The intimidation of the DMK has also threatened. Such tension was more in the senthurai than in other parts of the constituency. This is said to be the main cause of the Hindu Front. This is

because there is a communal organization called the Hindu Front. This system also enhances the large scale contribution to violence against the Dalits. It is now important to note that the involvement of the Hindu Front in the murder of Dalit Lalitha, It is possible to see that the polygon has changed into the operating system of this system.

An opinion on the part of the mouthpiece is being spread out that Dalit young men have attacked a journalist because they were wearing yellow vest.However, the journalist complained to the police that he was attacked by the sensationalist who identified himself as a Dalit. It is understood to get rid of the stroke of the mask. Thus, the continuing shameful ruthless repression, such as preventing the voting rights of the caste in the name of caste for political gain in the twenty-first century, It's a big head for India.

So demonstration is announced and proceed on Ariyalur on 25th April and in Chennai 24th April. These demonstrations are only synchronized in both places since short-term intervals. These include all secular democratic forces with secular progressive allies and come forward to protect democratic rights for the simple people," said Thirumavalavan.

Thirumavalavan denouncing the Attack on Dalits and Demonstration Announcement