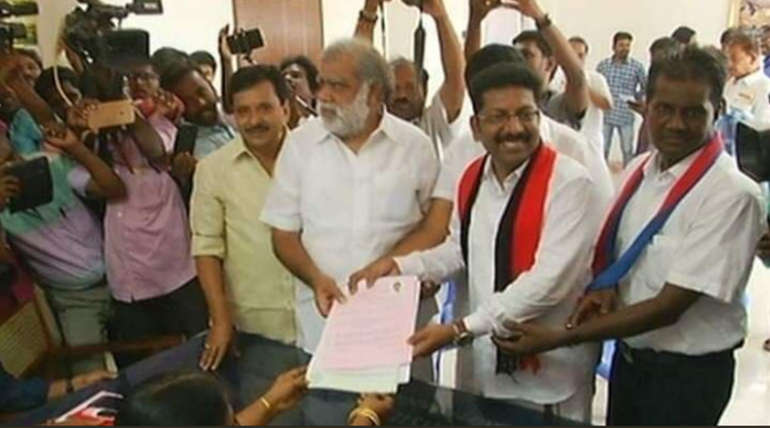 The by-election in Thiruparankundram is the second by-election in a row as the winner S.M. Seenivel who died on counting day. The first by-election saw Mr A K. Bose of ADMK win. The second by-election is now being held after the controversial setting aside the election win Mr A K. Bose. The opposition candidate Dr R. Saravanan of DMK challenged the candidature of Mr A K. Bose in court as the approval to contest was given by the leader of the ADMK party Ms J. Jayalalitha who was terminally ill at the time and was said to be an unconscious state. Thus the win of Mr. A K. Bose was set aside by the Madras high court. But Mr. A K. Bose too died on August 2018 during the period of case hearing.

One of the candidates contesting in Thiruparankundram is Dr R. Saravanan contesting for DMK. He is an oncologist in Madurai. He also contested in the previous assembly election for DMK and lost by 42,670 votes to Mr A K. Bose (since deceased). After the death of Mr A K. Bose, Dr R. Saravanan appealed to the court that he should be announced as the winner as the second highest vote getter. But the Madras high court dismissed the plea and directed the election commission to conduct another by-election.

He has reported in his affidavit of having a case against him over allegations of using an expired stent on a patient in the hospital he runs in Madurai. Though he claims it is the fault of the supplier, nothing has been proved yet.

He has promised in his campaign to improve and maintain the basic necessities such as water, sewage and electricity. He has also promised Thiruparankundram will develop as a whole into a hub with a high standard of living.

ADMK is the dominant party here as they won 8 out of 12 previous elections here. So they are contesting with the advantage of local support. DMK is also nominating S. Kanimozhi wife of Dr R. Saravanan as the alternative.