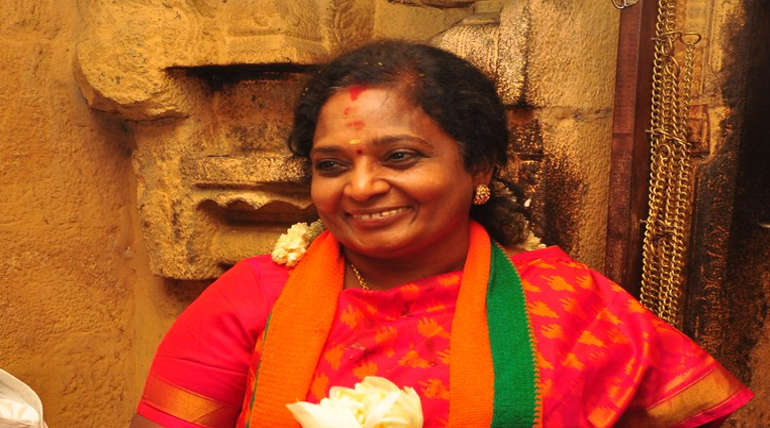 â€œMr Stalin is not going to get any votes by walking in Thoothukudiâ€, told Tamilisai Soundararajan the leader of BJPâ€™s Tamilnadu wing to reporters in Chennai airport. Mr Stalin leader of the DMK party is finding new ways to campaign. One of them being walking the streets of Thoothikudi to campaign for his Ottapidaram by poll candidate.

Tamilisai has been gong head on with Mr Stalin election season. She mocked him for his statement saying Modiâ€™s budget is â€˜a comedyâ€™ back in February. She again criticised his â€˜Grama Sabhaâ€™ meetings where he interacts with local peopleâ€™s queries as a setup where only his supporters participate.

Recently Mr Stalin spoke in the Mayday celebrations stating that Modi is not Indiaâ€™s protectors but he is the one who robs the nation. Countering his comment Tamilisai tweeted â€œit is hilarious that such a statement is coming from a party whose strategic mix of science and political influence to conduct corruptionâ€ citing the 2g spectrum case. She also added that Mr Stalinâ€™s statement begs the question that if he is throwing the blame on others before someone beats him to blame him.

She also constantly reminds the people that Mr Stalin is in this position only due his fatherâ€™s influence and not of his own efforts. She also remarked that people doesnâ€™t see him as a potential leader of the DMK party let alone the leader of the state.

Mocking of the walking

Coming back to the mocking of the walking Tamilisai added that no amount of walking will earn a win for any of them including Mr Stalin, Kanimozhi or in the broader sense DMK and said that rather sarcastically.