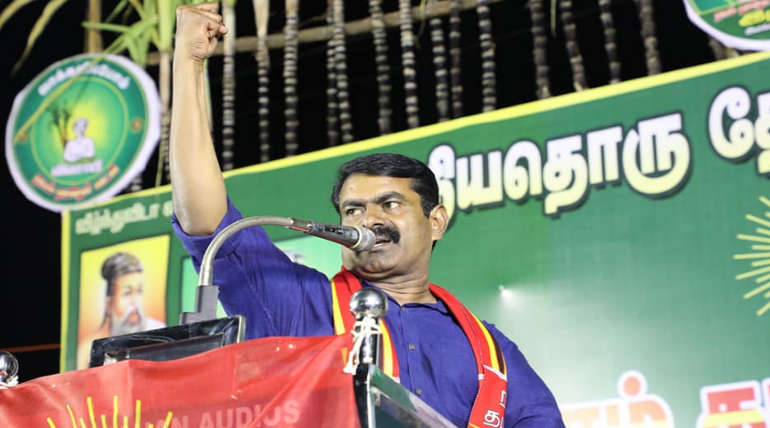 Seeman's Naam Tamilar Party Cuddalore and Chidambaram candidate introducing meet held at Vadalur yesterday night. Seeman, coordinator of the party participated and introduced the candidates. He then said: We have decided on behalf of the Naam Tamilar party to boost water resources, increase agriculture, increase national agriculture and state employment.

But now the Tamil Nadu government is threatening the farmers to give up agriculture. The Cuban Country, which produces only sugarcane, is regarded as the World Sugar Cup and has grown into a recognized country. The countries like Australia, Brazil and

Denmark have grown to become world-renowned countries by feeding sheep and cattle.

We make lifesaving medicine available to everyone without the distinction of being poor. State hospitals are not as good as the quality of the poor is in power. Only cash-strapers can receive survival treatments. We will transfer this situation to the people of

the world and provide universal medicine.

We have a form of anti-immigration system in behalf of the Naam Tamilar party. If we come to the power, we will get the rid of bribery. We do not have a caste if the Tamil party comes to power. Tamils is enough to eligible for everything. Government school

There will be poor people in the country which offer free for everything. Prime Minister Modi  thinks about farmers only at election times. The Prime Minister while visiting of all states in India, wear the hat of their respective states, wear cultural attire and wear a turban seems to be a big drama. Have he worn like a Muslim on a day? The only politics that the BJP has got is Pakistan. If there is no Pakistani, the BJP does not have politics.

If we succeed in Tamil Nadu in, we will create a position that we are not uneducated. We will give priority to individual skills. We prohibit the sale of drinking water. Your valuable strength is a valuable weapon to protect agriculture. You send your votes to

the Naam Tamilar party and send Tamil candidates to the Lok Sabha. Let's highlight India's status within six months. Trust us and give us the power to replace India.