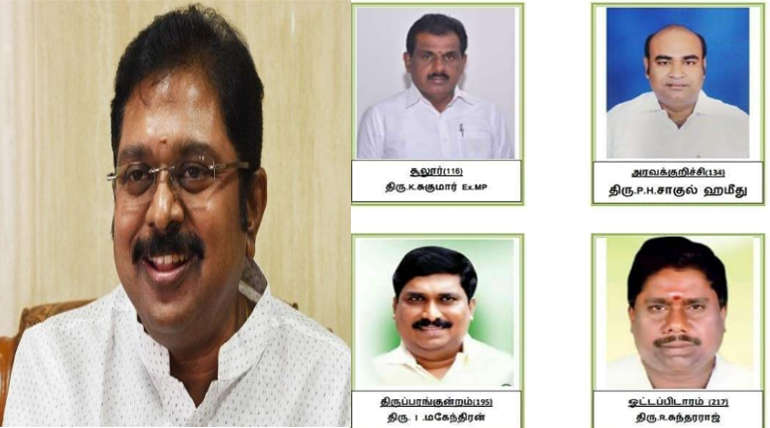 The nomination papers of Thiruparankundam, Aravakurichi, Ottapidaram, and Sulur 4 starts today. In the 22 Lok Sabha constituencies of Tamil Nadu, 18 seats were held in the last election. The election has not been announced for Aravakurichi, Ottapidaram and Thiruparankundram due to the case. It was declared vacant by the culmination of the Sulur block AIADMK MLA Kanakaraj.

In the meanwhile, the by-elections will be held on May 19 for the four assembly constituencies. The petition can be filed till 29th. The review of nominations is on the 30th. Last date for withdrawal is May 2. The final candidate list will be posted on that day. The DMK, AIADMK, AMMK, Makkal Neethi Maiam and Naam Tamilar â€‹â€‹are contesting in the 4 constituencies for the by-elections. On behalf of the DMK, Pongalur Na palanisamy (Sulur), V. Senthil Balaji (Aravakurichi), Dr. P. Saravanan (Thiruparankundram) and M.C.Shanmugayya (Ottapidaram) have been declared as candidates. The task of selecting the AIADMK candidates has begun. Yesterday, personal petitions were received from those who wanted to contest on behalf of AIADMK. Candidates for parties including AIADMK will be announced on a day or two.

This midterm election is considered to be very important because the AIADMK and the DMK have made serious efforts to maintain rule. DMK leader MK Stalin is campaigning in 4 constituencies from May 1 to 8.  Similarly, Kamal Haasan going to campaign for Makkal Neethi Maiam in two stages, from May 3 to 6, and from 10 to 17 May. Chief Ministers Palanisamy, Deputy Chief Minister O.Pannerselvam, ministers will campaign for the AIADMK candidates. The deputy general secretary of the party, I.Periyasamy (Tiruparankundram), former ministers KN Nehru (Ottapidaram), K. Ponmudi (Aravakurichi) and AV Vellu (Sulur) are headed for this election.

Sahul Hameed is the chairman of the Amma Makkal Munnetra Kazhagam. Sukumar was a former parliamentarian from Sulur. He is currently a sub-district secretary of Coimbatore,Sundararajan, a former MLA, is contesting in Ottapidaram constituency. He is the co-secretary of MGR Youth Federation. Mahendran is also a former MLA contesting in Tiruparkankundam constituency. He is currently in the Madurai west Sub-Divisional Secretary of AMMK.