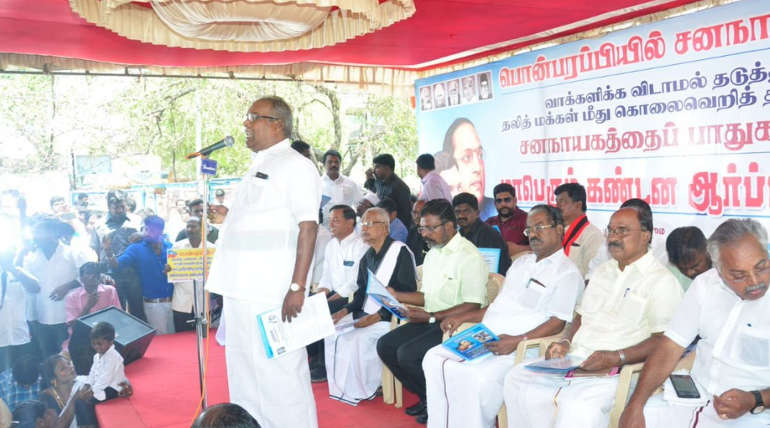 The announcement of Viduthalai Chiruthaigal Katchi (VCK) president Thol Thirumavalavan has provoked and created a stir in Tamilnadu politics. Due to the drawing of the symbol in the Lok Sabha polls, the dalits in the village of Ponparappi were beaten and their houses were looted. The allegation that such violence has been committed is by the inspiration of the PMK.

Panruti Velumurugan who resigned from PMK has started a new political party Thamizhagan Vazhvurimai party and now it supports DMK.  Velmurugan campaigned for VKC head thirumavalavan so for this reason. So Pattalai makkal party heads shows hatred towards them.  In the interview given a popular TV, "if Ramdoss and Anbumani don't like me to be in politics, I'm ready to leave politics"; Thirumavalavan has said that hard working people need to live in peace and ready to quit the political career. That interview of Thirumavalavan has created a stir in the Tamil Nadu political field.

Lawyer Balu who belong to PMK spoke yesterday about Ponparappi violence. He said that the DMK is the reason for Viduthalai Chiruthaigal party and PMK conflict. It is noteworthy that one day Thirumavalavan would come to the reporters to tell the journalists about how their party were respected during the Lok Sabha elections by DMK.