What You Did for 5 Year as MP: Semmalai Slaps Questioned Volunteer 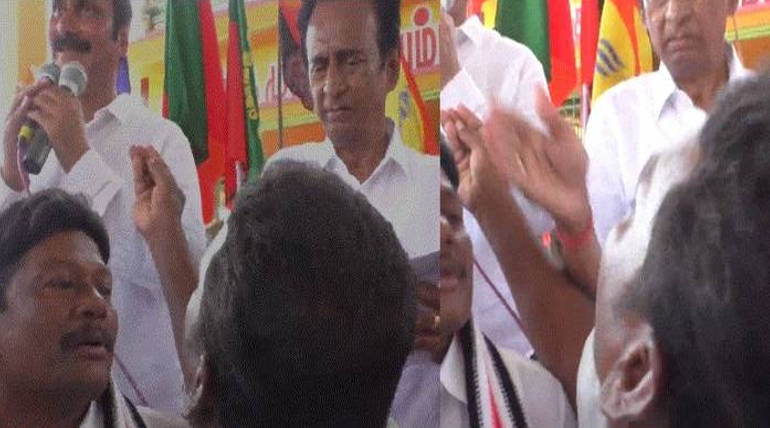 A questionnaire asked Anbumani "If you were fighting against the Salem eight-lane corridor what you did to the constituency while being a MP for 5 years." Semmalai suddenly slapped that questioned volunteer. The video getting viral in social medias.Farmers are fighting against the Koodankulam hydrocarbon project and the Methane project. Similarly, 13 people were killed in a firearm on people fighting against Sterliate.

CBI is investigating the case. Similarly, the  eight-lane corridor plan was brought into force and the agricultural lands were forcibly captured. Political parties, civilians and peasants fought against it. Particularly in the opposition parties, The government banned Ramadas to enter to his Dharmapuri Lok Sabha constituency. Anbumani who had fought against the eight highway was booked in a case.

At the end of the High Court intervention, the land acquisition was stopped. In this case, the hard-line criticism of the Congress and the BJP in the parliamentary elections has been severely criticized by the DMK suddenly joining the AIADMK.For both parties it is seen as a drawback. Anbumani Ramadoss is contesting in Dharmapuri constituency. Suddenly a volunteer said, 'Sir, you were the MP for 5 years. What did you do for constituency. You have opposed the eight highway road plan. "The people gathered there identified him as an AIADMK activist. Then the police came and dragged him. That volunteer shouted that why he was up to the eight-lane corridor.

What You Did for 5 Year as MP: Semmalai Slaps Questioned Volunteer