Boeing 737 Lands on Florida River and Fortunately No Death Reported 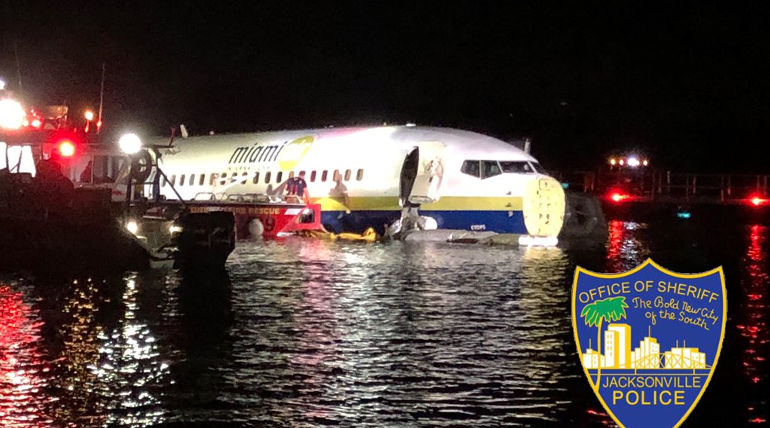 Flight lands on the Florida River which tried to land under a heavy thunderstorm and It is fortunate to know that all 136 passengers on board are safe On Friday, Boeing 737 slid into St John's River near Jacksonville, Florida. There is no count of causalities which means that all are safe. However, it is said that two passengers suffered from minor injuries. The flight's origin is Guantanamo Bay reached this river finally.

The mayor of Jacksonville, Lenny Curry, said on Twitter that all on board were alive and accounted for The crews started to work to control the jet fuel on the river water. He added that Donald Trump called him to offer help. The plane now is down the river and the Fire and Rescue is at work. Now the question is, how did the US Federal Aviation Administration approve the Flight Control System of Boeing 737.

Boeing Jetliners are encountering problems around the world. Since March and after two crashes were reported killing 346 people. Antiâ€“Stall software is what now on the heads of experts. It is said that it pushes the nose of the planes based on erroneous sensor readings. A technical review is said to start by next week to investigate the issue. Nine International civil aviation authorities have confirmed their participation in the meeting.

The meeting will be head by former National Transportation Safety Board chairman Chris Hart. Other experts are from the FAA and NASA. This group will check the Flight Control System and fix the Anti Stall System. In both, the previous crashes, sensors were responsible for showing false instructions. Full-fledged training on Max for the pilots and the faulty sensor fixation is the expectation as per the future and the early meetings and decisions.

Boeing 737 Lands on Florida River and Fortunately No Death Reported